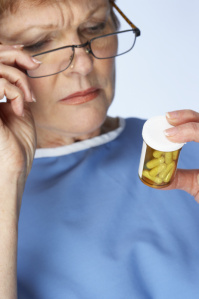 About 70% of women with breast cancer have tumors that are sensitive to hormones. Hormones, especially estrogen, enter the cancer cells and signal them to grow and divide. Hormone therapy is a treatment for breast cancer that prevents estrogen from “feeding” the cancer cells. Many women who have a high risk for breast cancer or who have already been treated for breast cancer are prescribed hormone therapy, usually for a period of 5 years. Hormone therapy can prevent breast cancer from starting or returning. One common type of hormone therapy is the drug tamoxifen, which stops estrogen from getting into breast cells. It is used mainly for women who have not reached menopause. Common side effects include an increase in hot flashes, some vaginal irritation and discharge, and a risk of cancer of the uterus. Women also are told not to get pregnant while on tamoxifen since it can cause birth defects. Another type of hormone therapy, an aromatase inhibitor (generic names letrozole, anastrozole, and exemestane), is now considered best for women who are in menopause. Normally, fat cells make some estrogen, even after a woman’s ovaries stop working at menopause. Aromatase inhibitors stop a woman’s body from making any estrogen outside of her ovaries. Side effects of aromatase inhibitors also include hot flashes, but in addition, about 60% of women notice nasty joint stiffness and pain and almost all women have troublesome vaginal dryness, making sexual caressing painful. In some women, the shrinking of the vagina and surrounding areas of the vulva are so extreme that Stacy Tessler-Lindau, MD, a gynecologist who is expert in sexuality and cancer calls it “the Barbie Doll syndrome.” Women taking aromatase inhibitors also have a high risk of osteoporosis because their bones are weakened by lack of estrogen. Despite knowing that a hormone pill a day may keep breast cancer away, about half of women fail to take their pills regularly for the full five years. The side effects of hormone therapy are probably a major reason for women’s giving up on it.

Several years ago, Pfizer Corporation was testing a drug called lasofoxifene. Like tamoxifen, it was a selective estrogen receptor modifier (often called a SERM for short). However, lasofoxifene had some real advantages over tamoxifen. It also appeared to prevent breast cancer (although its anti-cancer properties need more study). It was much better than tamoxifen at keeping bones strong and preventing osteoporosis. It also helped women with vaginal dryness and pain by helping the vagina to regain its ability to expand and lubricate during sexual excitement. It did not increase the risk of cancer of the uterus. When I read about lasofoxifene I thought, “Wow! What a great drug for women at risk for breast cancer or women who have had breast cancer!” I was surprised to hear that Pfizer decided not to seek approval for lasofoxifene in the United States. I asked several people with some inside knowledge of drug development why Pfizer dropped lasofoxifene after spending so much money and time researching it. There was a concern that laxofoxifene slightly increased the risk of serious blood clots or a stroke, but that is very common with hormones or SERMs. The major reason was apparently that pharma executives believed there was not a market: “Women won’t take a pill to prevent breast cancer.”

But what if a SERM like lasofoxifene, or a similar new drug, ospemifene, was at least as good as tamoxifen at preventing breast cancer (so maybe not quite as good as an aromatase inhibitor), and also could strengthen bones, treat vaginal shrinkage and dryness, did not lead to muscle aches, did not cause cancer of the uterus, and only caused a very minor increase in hot flashes? Do you think women might surprise the pharma companies and be not only willing, but eager to take it? One in eight American women will have breast cancer in her lifetime. One in ten women over age 50 has osteoporosis of the hip, with a high risk of hip fracture from a fall. Six out of ten women in menopause suffer from vaginal dryness. The good news is that ospemifene is now on the market in the United States to treat menopausal sexual problems, and is undergoing more testing on its ability to prevent breast cancer. Lasofoxifene has also been brought back from the medical cemetery and licensed to a new drug company, Sermonix. Research on its effects is ongoing. If one or both of these new SERMs proves similar to tamoxifen in reducing breast cancer risk, but 75% of women were willing to take it for five years instead of the 50% who stick with tamoxifen or an aromatase inhibitor, a lot of lives might be saved, not to mention the reduced misery of women who give up their sex lives or end up with a broken hip. Unfortunately, the government will probably never again invest the amount of money and time it would take to prove whether a new hormone therapy for breast cancer is as effective as tamoxifen or the aromatase inhibitors.