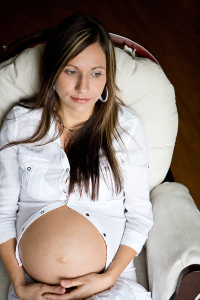 Last year, about 4,000 pregnant women in the United States found out they had cancer. The most common cancers found during pregnancy are breast cancer, ovarian cancer, Hodgkin lymphoma, and leukemia. As women delay childbirth in order to complete their education or start careers, more are pregnant at ages when

suddenly discovering you have a life-threatening illness. When women are seen outside of major cancer centers, they are often still advised to terminate the pregnancy.

After years of research, however, oncologists have found that most women can be treated safely with chemotherapy once the first trimester (13 weeks) of pregnancy is complete, since by then the treatment is less likely to damage the organs forming in the fetus. Women can also have many types of surgery, with only a slight risk of miscarriage. Of course limitations still exist. Radiation therapy to the pelvis or chest can be a problem if the fetus would receive too high a dose. Women with fast-growing, acute leukemia are also one group who still may need to choose between the mother’s life and the pregnancy. If oncologists believe it is safe to delay cancer treatment, they may suggest that a woman deliver several weeks early, as soon as it is safe for the baby.

One lingering concern has been whether children who were exposed to a mother’s chemotherapy during her pregnancy would have problems with learning or behavior. Two recent follow-up studies suggest that chemotherapy does not damage children’s ability to learn or cause behavioral problems. One was a follow-up of 57 children whose mother’s were diagnosed with cancer during pregnancy–35 exposed to chemotherapy and 22 whose mothers had no chemotherapy. At an average of around 4-5 years, no differences were found between the two groups on measures of cognitive development (like IQ tests), problems in school, or behavior problems. Almost all children were within the normal range on these measures. These children are part of a group being followed in the Cancer and Pregnancy registry by Elyce Cardonick, MD, a maternal-fetal medicine specialist at Cooper Hospital in New Jersey. She also is one of the founders of an advocacy group of peers helping women diagnosed during pregnancy, Hope for Two.The Canc

The second study came from 129 children with a mother diagnosed with cancer during pregnancy, followed from birth to 36 months in a variety of European centers, with a median age of 22 months at last testing. In this group, 74% had been exposed to chemotherapy. Again, tests of development and behavior (as well as heart health, since some drugs can do cardiac damage) were largely normal. However, in this larger study, when babies were born prematurely, they did show developmental lags. It could be that when the children are older, these early differences will disappear, since an effect of premature birth was not seen in the U. S. study. Another possibility is that subtle differences due to premature birth do not show up when a smaller number of children are studied.

Both sets of authors agree that giving chemotherapy towards the end of a pregnancy is a better choice than forcing an early delivery in order to start the mother’s cancer treatment, since any effects of the drugs themselves seem less serious than the potential problems a baby may have from being born very prematurely, or at a low birth weight. These studies agree with another recent follow-up from UT MD Anderson of over 60 mothers who were treated for breast cancer with chemotherapy during the last two-thirds of pregnancy. No unusual health problems or rates of birth defects were reported by the mothers.