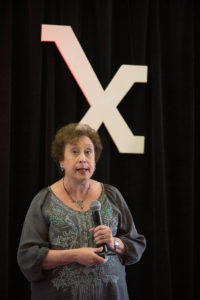 At this weekend’s Medicine X conference no topic of discussion has been taboo. And one of the speakers who brought an important subject — sexuality and cancer — to center stage was pioneering clinical psychologist Leslie Schover, PhD, who has been doing work in this area for more than four decades.

As the founder of Will2Love, Schover is developing programs to help cancer patients with post-treatment sexual difficulties in the privacy of their own homes. “My mission over the next five years is to double the number of cancer patients that get help for sexual problems,” she said during her talk. “Sex is, of course, a very private issue.” She hopes her goal can be met by offering resources — including webinars, forums and eventually tele-therapy — in a comfortable setting for patients.

Schover started her journey in the field of sexuality in the early 80’s doing clinical work and research on cancer and sexuality at University of Texas MD Anderson Cancer Center. She was struck by the fact that for many patients, treatment was technically a success but their quality of life suffered greatly because of issues with sexual dysfunction. The numbers are striking: According to Schover, 66 percent of female cancer survivors and 59 percent of male cancer survivors struggle with sexual problems, but fewer than 20 percent seek help.

As a two-time breast cancer survivor, Schover understands the topic all too well. “Even as an expert it’s difficult to get information,” she said. “The oncology world has denied for far too long the importance of the sexual consequences of cancer. It’s time to step out of denial.” What exactly are the sexual consequences of cancer? For women they can include vaginal dryness, pain and loss of sensation in the nipples for women; some men experience an inability to get an erection. For both genders, a decrease in desire can be common; Schover told me after the talk that cancer patients often feel like they’re “not a sexual person anymore.”

Another issue that Schover sees are the “unrealistic sexpectations” that are often given to patients. Physicians may stress the positive cosmetic outcomes of breast reconstruction surgery, for example, without discussing the loss of nipple sensation that occurs after surgery. For prostate cancer, the ease of regaining erections is often exaggerated, giving men false hope.

It can be difficult for patients to discuss these deeply personal issues just as it can be difficult for physicians to bring them up. As a consequence, she told the audience, sex becomes the “hot potato” of conversation in oncology — tossed from doctor to nurse — and so on. “We can’t turn oncologists into sex therapists,” she said, “but hopefully we can get them to ask more questions and give them the resources available to do what they need to do.”

Sex seems to be everywhere — from social media, to movies, to the news — however, according to Schover, not much has changed in terms of discussing the sexuality of cancer patients since she started her research. “We’re open to young, beautiful people being sexual,” she explained, “but we still have a lot of taboos about sex and disease and sex and aging.” She told me that there’s a minority of doctors “who are great at talking about sexuality, and a majority who mention it as little as possible,” and she said more training is needed within the medical community on how to talk about sex in a frank and compassionate way.

Previously: Medicine X, the academic conference where “everyone is included,” returns,  A cure is not enough for young cancer survivors and Young, single, dating, and a breast-cancer survivor
Photo courtesy of Stanford Medicine X

Reprinted with permission from Scope: Published by Stanford Medicine News

Read our blog entry in the Journal of Oncology Practice